The threat of light pollution

After several years of stargazing, we realize which are the most suitable conditions to ensure a carefree night under the stars. In case these are the first experiences of stargazing, not knowing the emotions that a starry sky can give, most of us are still impressed and enchanted by the charm of the celestial vault, whatever it is, admitted to being in the presence of a discreet night sky. This, in my opinion, is the great power of the starry sky: being able to impress new minds regardless of the conditions in which it is. It is as if observing the Universe for a few moments was enough to make us understand that it is our true home, our origin, an awareness that is born in us imbued with tranquility and serenity. But in most cases, we experience these new and beautiful emotions totally unaware of the true nature of the sky we are observing, a sky that is ruined, dazzled, yellowed by the lights of man.
This sad truth can only be noticed if luck or enthusiasm made us end up under many night skies, which differ in quality and quantity of celestial objects offered.

But what is the responsible aspect of this unstoppable ruin of the skies?

One phenomenon in particular is directly responsible for the progressive loss of quality of the celestial heritage. I’m talking about light pollution. Despite the efforts of many associations that have been trying to defend the darkness of the skies for years, this seems to be an unstoppable phenomenon, a lost cause as many say. The world, in fact, is getting brighter, there is no doubt about this. It is enough to take a look at images taken by some of our satellites in any part of the world where night has fallen to realize how things stand. Detailed images of light pollution on our planet show a progressive and exponential worsening of the conditions of most of the night skies over the last 20 years. Recent studies have shown that the average brightness of our planet is increasing by almost 2% every year. Let’s not forget that, less than 150 years ago, the only light sources man had to deal with indoors were candles, while externally the only option was to be guided by the intense light of the Moon and of the starry sky.
Unfortunately, the deleterious effect on the night sky is not the only one. Few consider the environmental and human consequences. Plants and animals, as well as humans, regulate their behaviors on the the day / night cycle, known as the circadian rhythm, which for millions of years has represented an unperturbed “internal clock” for any species on the planet. Excessive lighting therefore involves a biological variation of this natural rhythm causing many cases of disorientation in different animal species, alteration of the photoperiod in some plants and general disturbance of sleep. Recent studies have shown that about two thirds of the world’s population lives in areas where the night sky is considered to be above the threshold that defines a polluted sky. The Milky Way, our galaxy, is now visible only by moving many kilometers from large cities, in a rural, mountainous environment or, better still, in a desert environment.

The image above, the result of precise measurements of the brightness of the sky, is a detailed overview of the propagation of light pollution worldwide. Taken outside the atmosphere at one of our satellites, this image was developed using high-resolution data processed by new softwares. As you can see, a large part of our planet is pervaded by artificial light. The most illuminated areas are undoubtedly Europe, where only part of the Nordic countries such as Sweden and Norway can still be considered “safe”, the United States (excluding desert areas) and part of Asia (especially India and China of the ‘East). The least affected areas are undoubtedly Alaska, a large part of Canada and the African continent, Australia and a large part of South America.
But… what about Chile? Is he also conditioned by the effect of increasing light pollution? Unfortunately it is, like the rest of the world, more or less quickly depending on the area. Fortunately, as can be noticed in the image below, a large part of the country is still safe, thanks to the presence of the Atacama desert which occupies half of the territory and which makes many highland areas uninhabitable. Another region that is still very dark is Patagonia, both Chilean and Argentine even if, at its latitudes, the generally unstable weather rarely gives nights of totally clear skies.
The most astronomical country in the world, where advertising lighting and activities such as construction, mining and sports lighting are the main sources of light pollution, has therefore felt compelled to start a battle against the slow but steady increase of light sources that are concentrated, as always, in urban realities. From the image it can be clearly noticed that the only “lighthouse” in Chile is represented by the capital city, Santiago de Chile. 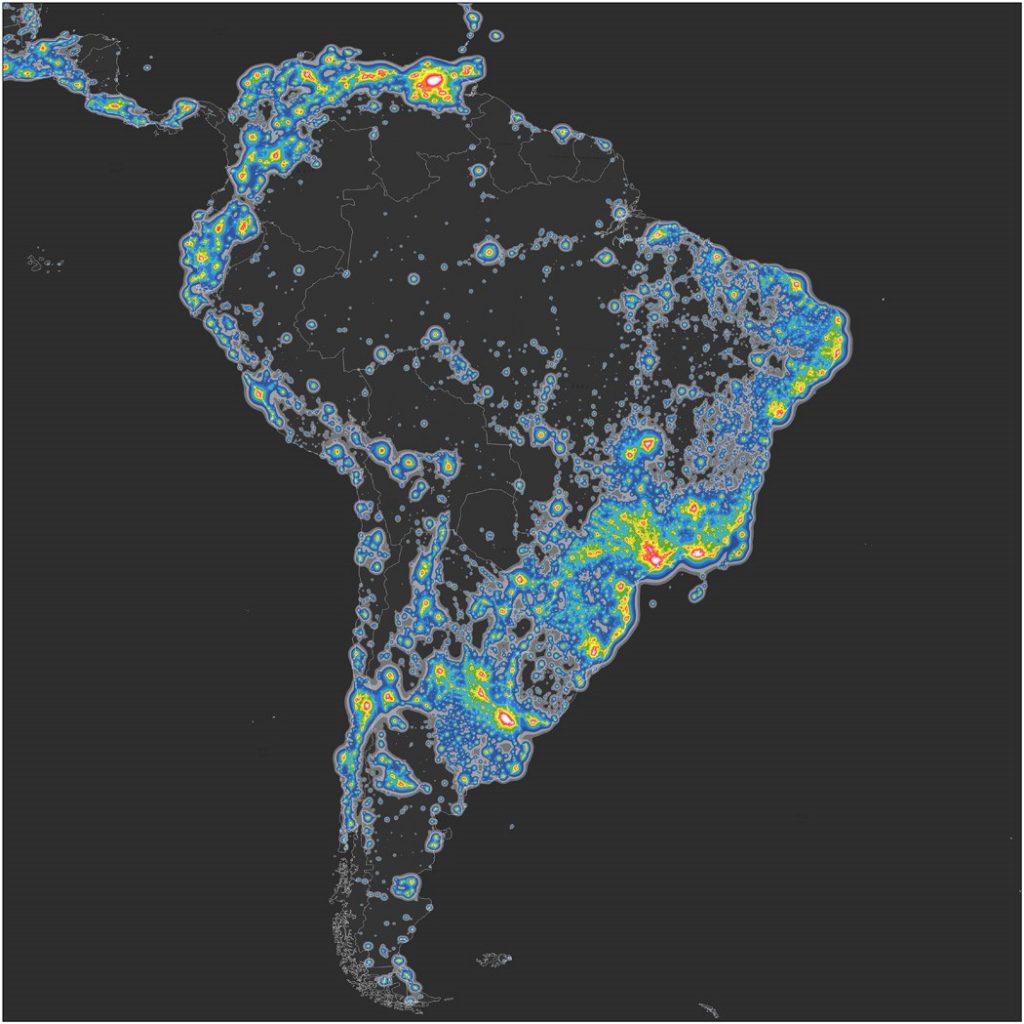 The OPCC or the “Oficina de Protección de la Calidad del Cielo del Norte de Chile” (the Office for the Protection of the Quality of the Sky of Northern Chile), is the organization that has been involved in the protection of night skies for more than 20 years in Chile, considering them an environmental, cultural and astronomical heritage of the country. The primary objective of the association is to convey the extraordinary value of the Chilean skies and to raise the awareness of the impact of light pollution through numerous awareness campaigns aimed to regulate lighting with cold light lamps (LEDs), which lead to an increase in the deterioration of the night sky, and general lighting modes, which are often incorrect and out of standard. For years now, the greatest efforts have been directed towards the installation of outdoor lighting systems compatible with national standards, a continuous struggle for the maintenance and improvement of the dark conditions of the sky.
Will the activism and perseverance of the OPCC be enough to stop or at least to slow down a lot the growing light pollution? It is a much more difficult battle than it might seem, whose outcome doesn’t only depend on the efforts of the association but on each of us, on our open mind, on being able to recognize the great value of starry skies and on our love for future generations, to whom we could leave a safeguarded heritage or who, bacause of our mistakes, will no longer know what the Milky Way is, remaining completely extraneous to the beauty of the Universe.
Astronomers and aficionados like me have a duty to contribute to the defense of the starry heritage, wherever we are.