The Humboldt Current, the Hadley cell and the Föhn effect: the perfect combination

While I was traveling south, towards Patagonia, more and more fascinated and conquered by this very long and narrow slice of land that is Chile, it was inevitable to realize the progressive change in the landscape. The aridity of the Atacama Desert conquers almost half of the country, coloring the scenery of the immense Andean plateau, with contrasts in harmony with the very long northern coast. From the capital, however, things start to change. Vegetation, lakes and rivers gradually take over the dry and rocky landscape of the north, up to the so-called “Sur Extremo”, the region of Patagonia, where the ice dominates, sometimes extending to the cold ocean waters, home to dolphins, sea lions, killer whales, whales and the friendly Magellanic penguins.
As I’ve already specified talking about the VLT, the Nordic regions, considered among the driest on the planet, are perfected by the extraordinary natural combination of different climatic aspects: very low rainfall, very low relative humidity and altitude of the plateau, ensuring, as I have already specified, more than 300 nights a year of undisturbed sky.

But what are the meteorological phenomena underlying this miraculous climatic condition?

I would start from the Pacific Ocean and, more precisely, from the Humboldt Current, the most important flow of cold water in the world. The Humboldt Current is a cold sea current that flows from south to north, more precisely from the western coast of Patagonia to the northern Peruvian coast, coming from the Antarctic Circumpolar Current. To tell the truth, I knew nothing about it before I arrived in Chile. The first time I accidentally suspected a possible cold water current, I was taking a bath along one of the beaches in Iquique, one of the northernmost cities in the country. After that quick bath I remember wondering: how is it possible that the water is so cold despite being so close to the Equator, so far from the Patagonian South and in a pure desert area?!

The aspect that makes the Humboldt Current so fundamental for northern climatic stability lies in the fact that it is the current responsible for cooling the ocean waters that flow close to a large part of the west coast of South America. This cooling consists in a decrease in the average water temperature of 7-8 ° C, with a consequent lowering of the air temperature which prevents evaporation and the formation of cumulonimbus clouds in those areas, thus determining a general scarcity of precipitation. 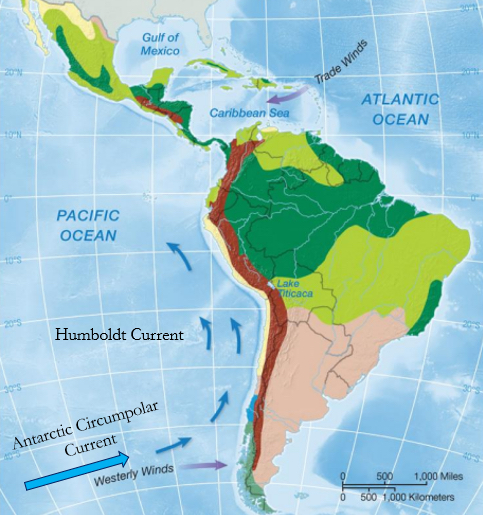 The effect of thermal inversion also plays an important role. This, together with the presence of a first “coastal Cordillera”, hinders the oceanic convective fog, known as “camanchaca”, the result of the mixing of cold water, carried by the Humboldt Current, with warmer water far from the coast, a typical phenomenon during the winter period. This phenomenon involves the maintenance of the arid and desert climate of all the northern territories.
In addition to the effect of the Humboldt current, to truly realize the natural miracle that distinguishes the Atacama Desert, it is necessary to examine a couple of other phenomena no longer linked to the action of water but to that of another natural element: the air. I am referring to the effect and behavior of atmospheric circulation in the latitude belt that includes the Atacama Desert and the action of the Cordillera of the Andes that linearly marks the border between Chile and Argentina. The latitude belt between 0 °-30 ° N / S is dominated by the famous Hadley cell, the atmospheric circulation responsible for convective motions in the areas between the equator and the tropics. Masses of warm and humid air coming from the equator ascend to the lower troposphere, cooling and dehumidifying. Subsequently, these move and descend towards the tropical areas, bringing with them high pressure and further lowering the relative humidity value. The convective effect of the Hadley cell is therefore responsible for maintaining the arid climate in all desert areas north and south of the equator near the tropics, including the Atacama desert, and the equatorial climate(low pressure) typical of the humid areas along the equator. 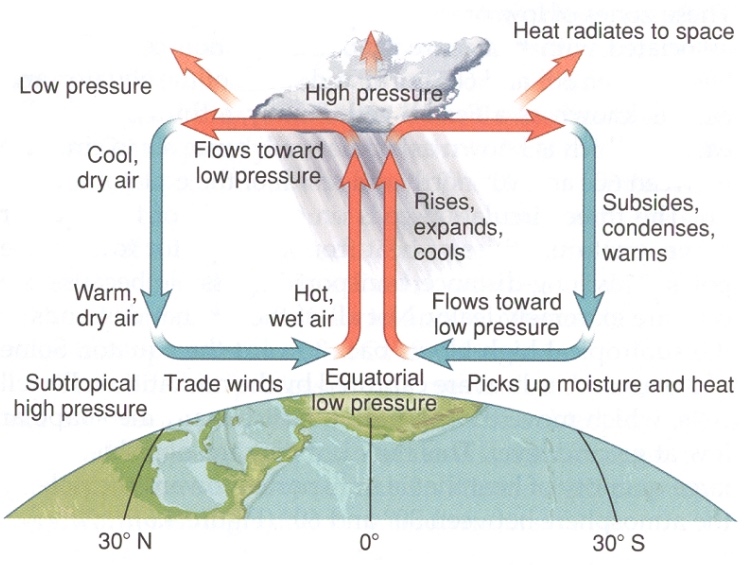 And finally, we arrive at the colorful Andean plateau. Thanks to the Föhn effect, or “favonium effect”, mountains over 5000 meters high are able to further defend the northern climatic stability with their height. The phenomenon is conceptually that described for the Hadley cell: a low pressure current cools following its ascension along a slope of the mountain range and loses much of its humidity in the form of precipitation. The opposite side will therefore receive much less humid and cold air, which progressively heats up by adiabatic compression, becoming hot and dry and favoring a stable climate.

In short … sunny days in Chile are almost always guaranteed! For more than 1500 kilometers it is possible to enjoy the ideal dry heat offered by the entire desert area, dominated by the intense and pure blue of the northern skies.