My first approach to Chile

Let’s face it … in most cases, of any trip we are talking about, unless you have a lot of time to explore and therefore discover very well all the facets that a country can present, the first 3/4 days are decisive to get an idea of ​​the context in which we have ended up. Unfortunately, often due to lack of time or lack of information on the real potential of the country, there is a risk that this first approach will become decisive and give rise to partially incorrect considerations.
This risk can be avoided by giving vent to our creativity, also developing simple itineraries based on the study of a country, inquiring to be able to get at least a basic idea of ​​what are the key places, which really deserve to be totally discovered.
And it is thanks to my passion for developing travel itineraries that I was able to avoid wasting too much time in places that might not deserve too much attention.
Thinking back on my long itinerary from north to south of Chile, I realize that I started my itinerary from the most touristic and fascinating reality of the whole country. I had already been traveling for several months, returning from Peru and eastern Bolivia. I had just passed through the desert area of ​​Bolivia. The incredible Salar de Uyuni, the Siloli desert and the Reserva Nacional Eduardo Avaroa. The turquoise, the pure white and the blue of the lagoons and salt lakes at an altitude of over 3500 meters, the bright pink of the Flamencos and the orange-brown of the mountains that line the route had literally colored my soul. After spending one night at an eco-lodge near the border between Bolivia and Chile, I was convinced that I would take a break from this whirlwind of colorful emotions. But upon my arrival in San Pedro de Atacama, around mid-December 2018, I realized that this was not going to happen. San Pedro de Atacama, a small town reality immersed in one of the most spectacular landscape contexts in the whole country.
A landscape dotted with volcanoes over 5500 meters high, a reality that offers tours that allow you to savor different contexts of indescribable beauty. The Lagunas Altiplanicas and the Piedra Roja locality near the Salar de Talar, the Gayser de el Tatio, the Valle de la Luna and many others including countless treks to conquer the top of some volcanoes that overlook the area. I was lucky enough to be able to take part in most of the organized tours, managing to get a fairly precise idea of ​​what San Pedro de Atacama can offer and also proposing myself as an aficionado organizer of some astronomical tours. Yes, the starry skies of San Pedro are truly incredible. This is demonstrated by the abundant offer of astronomical tours offered by local tourist agencies.
I stayed in San Pedro for almost a month.

And then? I decided to leave to continue the journey … towards Antofagasta. 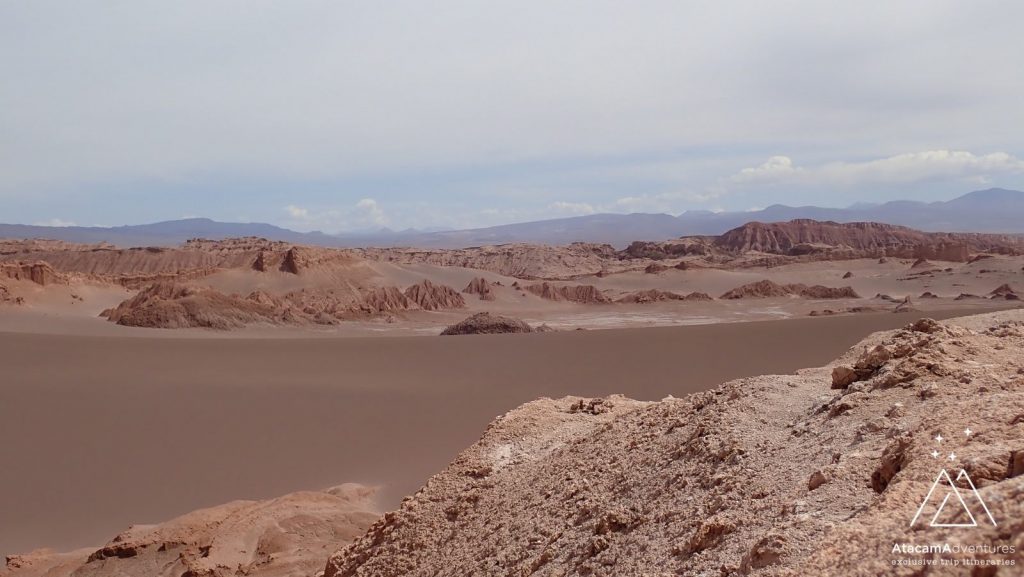 The Valle de la Luna, about 15 km from the center of San Pedro de Atacama, offers “lunar” emotions in the true sense of the word. A cycling itinerary not to be missed in San Pedro. To tell the truth, even before arriving, it was one of the scenic attractions that I had set out to visit, in my case with three other boys, a Spanish couple and an Argentine, who love adventure. The possibility of being able to go into the valley and reach the highest points of the area by walk, allows you to enjoy the whole surrounding area, admiring the fantastic rock formations created by the continuous erosion of the wind and, originally, by the hydrographic basin of the nearby Licancabur volcano. An equally typical activity in addition to cycle tourism is the famous sandboarding, which I first tried in Chile (although further north, near Iquique). 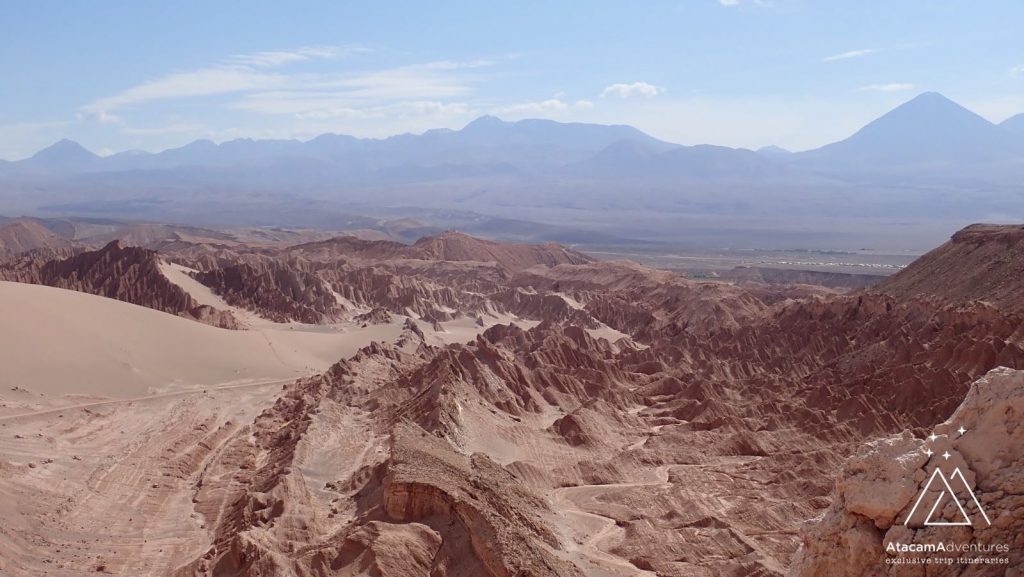 In addition to the Valle de la Luna, one of the most surprising itineraries in the area is certainly that of the Lagunas Altiplanicas. In my opinion there is no other tour in the area of San Pedro that can offer so many colors and contrasts, certainly one of the organized tours in which I was able to achieve the “peace of mind” .. between lagoons and salt lakes with colors in perfect harmony with the contrasts of the mountains above, all perfected by the blue of the sky. 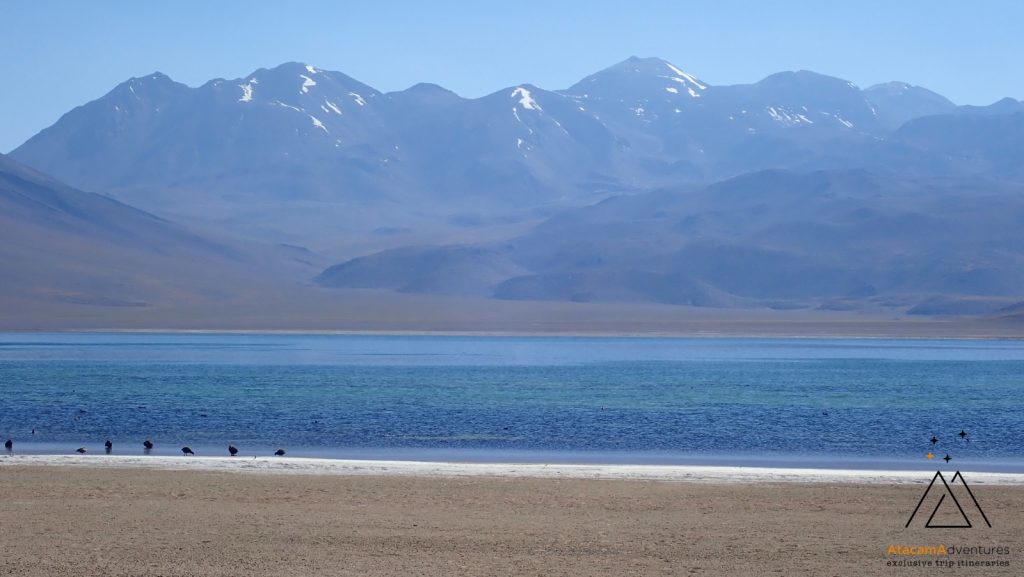 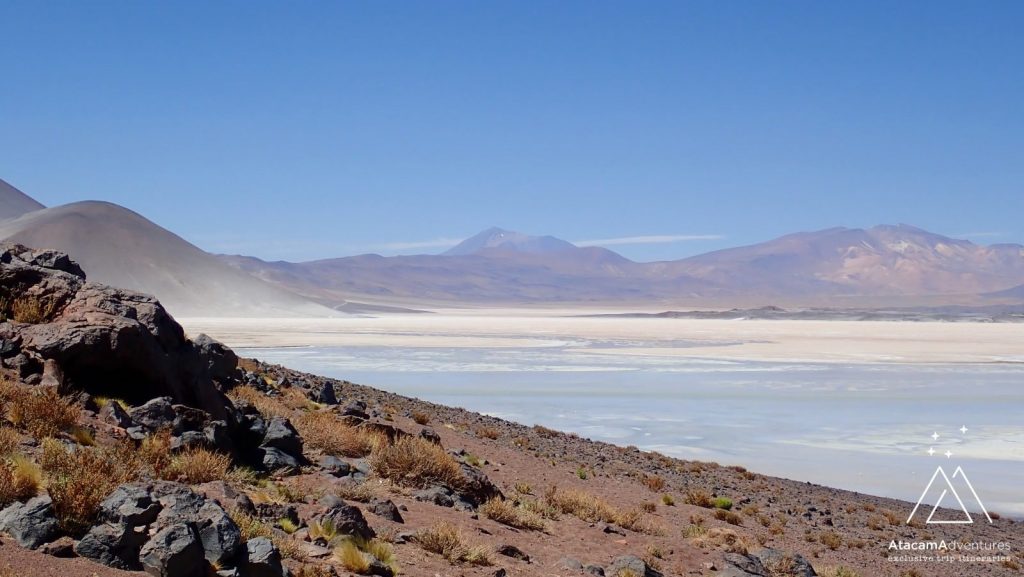